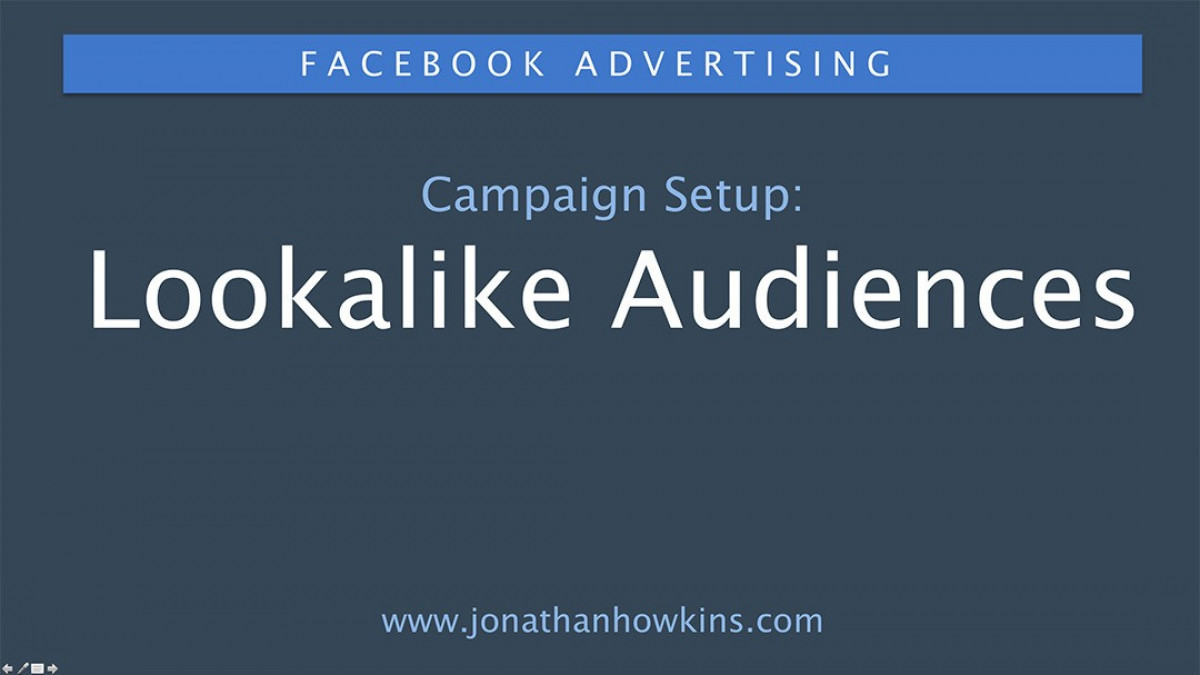 Dramatically expand your Custom Audiences with a Lookalike Audiences.

In the past we’ve covered the Facebook saved audiences and Facebook custom audiences, so now it’s time to have a look at the Lookalike audiences.

Firstly what is a look-alike audience, then we’re going to look at basically how to create them and also then using Facebook Lookalike Audiences and Exclusion audiences.

There’s a couple of extra things that you can do with the look-alike audiences to actually help you improve your targeting as well as expand your reach.

Facebook Lookalike Audiences are based on any one of your custom audiences.

There’s a couple of things to note about lookalike audiences.

Firstly you can only create Facebook Lookalike Audiences from a Facebook Custom Audience. So you can’t create them from Saved Audiences.

If you’ve got any questions about that or want to understand more about those Facebook Custom Audiences and Facebook Saved Audiences, then have a look at some of my previous videos.

So if you’ve got say a Custom audience that’s both large in number, and typifies your ideal type of audience – for example if you’re using a custom audience based from a customer file, and you’ve got a database of two or three thousand customers, then obviously that will represent a really good quality of audience both in terms of size of numbers.

So obviously when you upload that into Facebook and you create a lookalike audience, then some of those attributes and characteristics of are of an action-taker audience, which will give you a far better quality look-alike audience.

The third thing is that when using Facebook Lookalike Audiences, sometimes it’s very useful to just use the look-alike audience as it is, but sometimes it’s good to actually combine it with an exclusion audience.

It’s good to also use lookalike audiences even if you’re more focused on local marketing, and not looking to target the whole country.

Because what you can do is take your initial file, create a lookalike audience, which obviously expands it in numbers, but then use some of your geographic parameters when you create your ad, set to bring that number down and constrain it to the actual target area you want to look at.

So people who’ve watched a certain percentage of my videos. I’ve created lookalike audience from a specific webpage and over a 60 day period.

I’ve created a lookalike based on website visits, anyone visiting my website at all, using multiple countries and I’ve done it from page engagement as well.

So you can create look-alikes on lots of different sources and then obviously the more custom audiences you got, the more lookalikes you’ve got as well.

As with all aspects of Facebook Advertising, it’s really just a case of once you’ve built those custom audiences, and once you’ve created the lookalikes, then its’ just a case of testing them and seeing which ones actually give you the best results, not just in terms of engagement, but actually taking action.

Now just a couple of things where I said with using those look-alike audiences in terms of what you can do at your ads manager level. I’ve used a custom audience, but then obviously I could exclude a certain audience as well.

Now this might be useful because if I want to target people about a new program or product, with my look-alike audience, but I want to exclude the actual source lookalike source (Custom Audiences), which are the people who are already on my database, to make sure that obviously I’m not putting the same ad in front of people who’ve actually already either opted in or purchased from me.

So it’s a great way to start with a look-alike and then really exclude the initial source file to make sure you’re not crossing over with it.

As I said the other way is that if you’re doing more localised advertising, then you can still use a custom audience and then look-alike audience, but then obviously when it comes down to your particular locations you can then constrain it to wherever geography you want it.

Okay so really that’s all there is on Facebook Lookalike Audiences, it’s very sort of straightforward.

But if you’re not really ready, or at the stage of being able to create Lookalike Audiences, because you haven’t got the Custom Audiences, then go and check out my video on Facebook Saved Audiences, and pick things up from there.