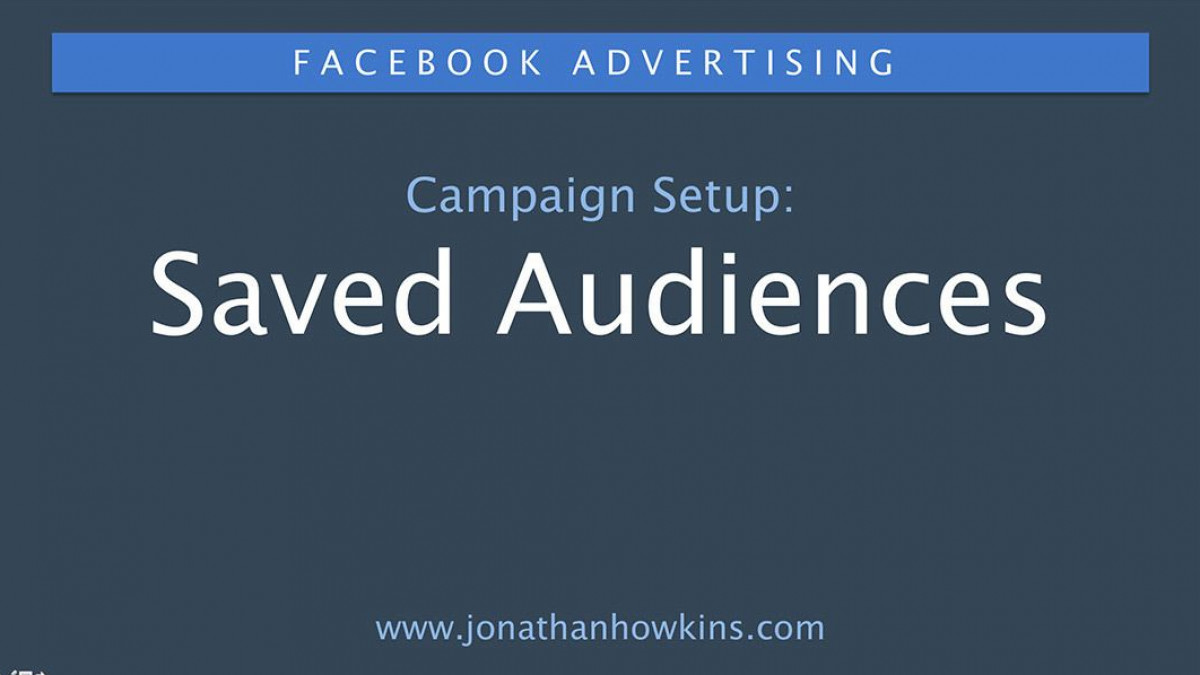 If you're just starting out with Facebook Advertising, the Saved Audiences or ‘Interest’ based audiences is where you want to start.

In this article we’re going to be talking about Facebook Saved Audiences.

This is very much for people who are not yet ready to create their Facebook Custom Audiences, or Facebook Lookalike Audiences.

So, generally for people who are just starting out with Facebook ads and Facebook targeting, the Saved Audiences or ‘Interest’ based audiences is where you start from.

And there’s also a few little extra tricks to share with you to actually help you improve your targeting with Facebook Saved Audiences.

So, fundamentally what is a Saved Audience?

Well, it’s an audience that is mainly using generally demographic and interest based targeting.

Now, if you do Facebook posts then you’ve no doubt done a boosted post, and have selected maybe the bit of demographic data, and some basic interest data.

So, what you can do is if you go to the Facebook Ads Manager, you can actually put this same data into a Saved Audience.

And by creating a Saved Audience you can then go back to it and use that same audience again and access it very quickly.

This is great when you’re doing a lot of ongoing posts and you want to also create different Saved Audience to test against one another.

But there’s another part to Facebook Saved Audiences, which is for me is actually the interesting part of it.

And that’s using inclusion and exclusion audiences on top of that and I’m going to be showing you exactly how to do that in just a moment.

Now, a Custom Audience is where you ultimately want to get to, but in order to get there you often have to start with saved audience.

And another area where you’ll probably use a Saved Audience is where you’re doing some very early testing, or just want to start activating your Facebook Pixel, and you are happy just to go to a broader audience to start with to get a sense of engagement.

And as I said, the third area is where you’re doing regular posts and you want to be able to literally just hit the boost post, select one of these pre-saved audiences, and get those moving as quickly as possible.

So let’s run through a simple scenario with my online guitar business, using saved audiences, and specifically using inclusion and exclusion audiences.

For example, if I was introducing a new course or new product which was aimed at people who are really into blues guitar playing. And I wanted to really try and create and nice tight and narrow audience for that.

But as I said we’re not using the Custom Audience here so now I target people in the United States predominantly and I can see that gives me 240 million people.

So, let’s start to narrow things down, and there’s the normal demographic side of things. So, I know my target audience is a little bit older and I’ll put them in their 40 to 65 plus.

I know they’re 90% male so I’m going to put that in there. Now we’ve got 46 million people targeted.

Okay, so now what I might start to do is I put in electric guitar as an interest and we’re down to 3.8 million people.

Now, often what I’ve seen people, do is actually then go and add more types of demographics straight into this same box; whereas actually what we want to do is start with this broad category and then slowly narrow it down.

So, what I’d do is I’d leave just a single item in the ‘Interest’ first box which is fairly broad-based, but then start to narrow it down.

First I might narrow it down by identifying that I want people who are interested Electric Guitar AND in Joe Bonamasa.

‘AND’ is most important thing about Facebook Saved Audiences.

However, when we take it down and we go into the “Narrow your audience” and we put in Joe Bonamassa, we go from that 4.4 million down to 460 thousand.

So, we’ve really started to hone in on our sort of audience and we can go a step further if I just wanted to check people are really into the Blues, I could also put “AND” Eric Clapton.

So, we’ve got people who are interested Electric Guitar AND Joe Bonamassa AND Eric Clapton, so we’ve really honed in on our audience.

And this is where you can have a lot of fun just messing around.

The important thing is to not load too many different ‘Interests’ into that first level of targeting.

As I say, using that Exclude and Include Audiences, can really turn a saved audience which can be relatively woolly and un-targeted, into something that actually is far more targeted and far more centred around your ideal customer.